An American outrage, and and a new low for gun lovers. 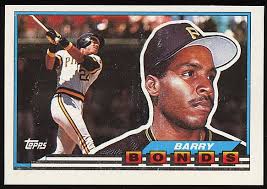 I need to rant a little bit about the latest outrage in American sports: the dissing of Barry Bonds by baseball writers who vote to admit former major league baseball players into the baseball Hall of Fame. (Only three guys who died in the thirties will get in this time.) 36%??!! You have got to be kidding me!

Why, exactly, isn't the greatest baseball player of our generation not a first ballot Hall of Famer? But field, he used steroids, he was a one of the main players in what is being called the "Steroid Era" of baseball.

I am sick of selective outrage and retroactive moralizing by these clowns who get to vote. (BTW, 36 voters voted to leave Jackie Robinson out of the Hall, so I guess we shouldn't be surprised at what this fraternity of dunces does with the power given to them by baseball.)

Barry Bonds was a great player before the so called "Steroids Era", and when he allegedly started juicing he became superhuman. He would have been a first ballot hall of famer before he allegedly stuck the first Victor Conte needle in his ass. So what's the problem? If everyone else around him was juicing where is the competitive advantage? Do you really believe that Roger Clemens was the only pitcher allegedly juicing at the time? If you do, I have a wonderful antique bell with a slight crack on the side here in Philadelphia to sell you.

Oh, and let's not forget, we idolize a racist who "once slapped a black elevator operator at Cleveland hotel for being "uppity," and when a security guard intervened, he [Cobb] cut the guard with a knife". He paid $100 to settle the case. He also beat up a disabled fan who heckled him from the stands in New York". What a guy. A drunk (Mickey Mantle), and thousands of others- such as Fergie Jenkins- who allegedly popped speed pills before games back in the day.

So now I have to live with these self appointed morality police denying the man who gave me the greatest baseball memories of my lifetime his just due.

Sorry, every voter who left Barry Bonds off of his (or her) Hall of Fame ballot struck out today.

Finally, some folks just don't get it. Americans have every right to love their guns and advocate for their right to bear arms, but do conservative wingnuts really need to be having "Gun Appreciation Day" on January 19th, which just happens to be the day that Americans celebrate MLK Day?

"A conservative coalition has scheduled the first-ever "Gun Appreciation Day," calling on gun activists around the nation to rally in support of the right to bear arms.

Gun Appreciation Day is set for Jan. 19. Gun activists are asked to turn “out en masse at gun stores, ranges and shows from coast to coast" in an effort to rally against President Barack Obama's “post-Sandy Hook assault on gun rights," according to a press release on the group's website.

On 01.19.13 go to your local gun store, gun range or gun show with your Constitution, American flags and your 'Hands Off My Guns' sign to send a loud and clear message to Congress and President Barack Obama," the site's landing page urges visitors.

Said Gun Appreciation Day chairman Larry Ward, according to a press release announcing the planned demonstration, “If the American people don’t fight back now, Obama will do the Second Amendment what he has already done to the First with Obamacare – gut it without a moment’s thought to our basic constitutional rights.”

Gun Appreciation Day is scheduled to be held two days before Inauguration Day, when Obama will be sworn in for his second term as president of the United States. [Source]

Don't say it; I know exactly what the rest of you Negroes are thinking.